Four Candles for Advent – a short story by Andrea 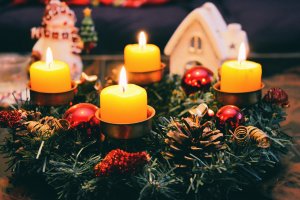 Andrea, a member of our Church family, has written this lovely Advent story to share. Thank you so much, Andrea!

Four candles are one of the items Ron had on his list when he goes shopping at his local hardware shop. Four candles for advent, as you do it.

He is glad that little hardware shop on the high street is still there. It is a quiet, old-fashioned shop, no annoying Christmas ditties playing, and other than in the popular British sketch, the shopkeeper understands Ron well, almost like a close friend… Always up for a chat. And that is very important for Ron. For a moment Ron wonders, what is the point of even buying candles this Advent? Nobody ever comes around. Ron lives on his own, a widower, and this year, to make things worse, no visitors allowed. Covid19. Shopping is the only time Ron would talk to another person. Candles? Christmas decorations? Why bother?

But then Ron remembers what those candles in advent meant. They were meant to bring light into this darkness. This darkness – nightfall by mid-afternoon. Steady stream of bad news – when will the next war be, which country the next dictatorship, when will life on the planet be impossible due to global heating…

Light as in hope on the horizon. As much as Christmas was about receiving the good news of Jesus’ birth, receiving gifts, Ron kind of knows it cannot be a one-way street. But what can he give? Donate to a foodbank, a charity?

Without thinking Ron makes himself a cup of tea and steps outside in front of his door. As people did during the clapping for carers. He can hear people talking. He can see festive decorations going up. Then he walks a few steps and starts speaking to the person taking a bin out a few doors up. About the cold weather and the short days. And about Christmas. It turns out he is called Ron as well, about ten years younger than him. A single man, just with a busy working life. The younger Ron says Christmas is meaningless to him, all he ever looks forward to is catching up with workmates at the office Christmas party, but then normally remembering nothing next morning as everyone would get wasted. Yes his parents would go to church and sing carols and do a big spread, but not this year.

After the two men chat for a while they agree that the true meaning of Christmas has been forgotten, all obliterated by this madness of stuff, too much food, that nonsense of Santa Claus rushing around like mad dropping off presents, enforced jollity whilst all the pain, suffering and social injustice carrying on across the world, despite of Christmas. They try to rediscover and retell the original Christmas story of Jesus’ birth and to understand how it would matter to us today. It is hard for them.

The simplicity – Jesus born in a stable, the simplicity to be just yourself where you are, no fuss, no keeping appearances, then walk up to your neighbour and start a conversation.

The gift giving – both Rons appreciated that getting to know a neighbour through a spontaneous and deep conversation is a gift indeed, especially in 2020.

Shepherds and wise men meeting each other – yes our older Ron was a man of manual work all of his life, a painter and decorator then a handyman. His younger namesake has a degree in business economics and works for a London based company I never understood in which position.

With all their differences they are trying to find common ground and wondering how they could make a difference, end all this darkness. Speak up against decisions that ruin futures. Lend a hand, even to a stranger. Not buy anything that is based on exploitation. Give to those who need. The list went on, the discussion becomes lively, even a little heated.

Other than their first name and their loneliness they have nothing in common, absolutely nothing, yet they decide that from now on they would pop outside with their cup of tea together more often. I cannot imagine how they even find common words to understand each other, but they have done somehow. Maybe because they both understand that the darkness of bad news, the social injustice, the uncertainty don’t just magically stop at Christmas. Rather than that their lives have been lit up this advent. They spontaneously invite each other to stop, listen, take in what happened around them. Advent is simple indeed and less spectacular, they know now.

We use cookies on our website to give you the most relevant experience by remembering your preferences and repeat visits. By clicking “Accept”, you consent to the use of ALL the cookies.
Cookie settingsACCEPT
Manage consent

This website uses cookies to improve your experience while you navigate through the website. Out of these, the cookies that are categorized as necessary are stored on your browser as they are essential for the working of basic functionalities of the website. We also use third-party cookies that help us analyze and understand how you use this website. These cookies will be stored in your browser only with your consent. You also have the option to opt-out of these cookies. But opting out of some of these cookies may affect your browsing experience.
Necessary Always Enabled
Necessary cookies are absolutely essential for the website to function properly. This category only includes cookies that ensures basic functionalities and security features of the website. These cookies do not store any personal information.
Non-necessary
Any cookies that may not be particularly necessary for the website to function and is used specifically to collect user personal data via analytics, ads, other embedded contents are termed as non-necessary cookies. It is mandatory to procure user consent prior to running these cookies on your website.
SAVE & ACCEPT